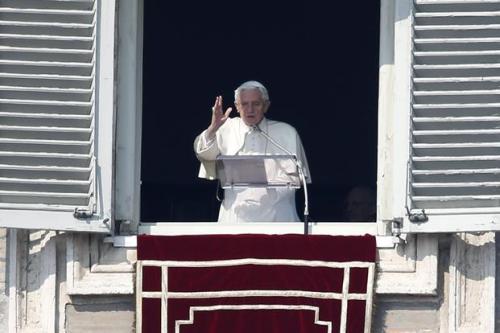 In a prayer written on June 8 of this year, but published today, November 14, 2019, the Holy Father declares himself in favor of Veri Catholici (true Catholics), using these significant words (Original in German, here; we translate from the Italian, here).

The Catholic Faith is “threatened by being being diminished, by being subjected to the standards of the world, robbing it in this manner of its greatness”, writes Benedict (on June 8, published November 14) in a prayer of three pages, written on the occasion of the 60th Anniversary of the Diocese of Eisenstadt, Austria.

The prayer is a treatise on the First World War, the end of the Austrian Monarchy, and on St. Martin of Tours (died 397 A.D.), who was born at Szombathely, Hungary, in the then Roman Province of Pannonia, to which the Diocese of Eisenstadt now pertains.

Benedict XVI closes by saying: “Lord, help us in these hours to be and remain true Catholics!”

Seeing that our international Catholic association, whose name, Veri Catholici, means “true Catholics”, and whose members wrote to His Holiness on many occasions in the spring, recognizing him still as the one and only true Pope, on account of his invalid renunciation, we cannot ignore that these words were written in June to encourage our members in our work.

Thank you, Holy Father, for your words!

Long live the one and only true Pope!

See ppbxvi.org for more information about this.

NOTE WELL: See our Twitter account @VeriCatholici for more about this Letter, since our volunteers are fluent in German and can give more information.

Comments Off on Pope Benedict speaks in favor of Veri Catholici